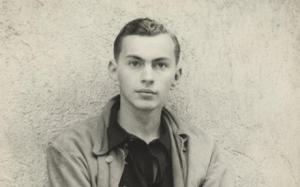 As far back as I can remember, my parents had novels by Gore Vidal on their bookshelf.  Titles like Julian and Burr and later Lincoln were things I lived with in my youth like wallpaper.  These books would arrive as part of their subscription to Book of the Month Club.  The books would regularly arrive in their corrugated packaging and I would see them just as regularly placed on a shelf to collect dust.  One day, however, I picked one of them up and started reading.  This simple act catapulted me into a world of politicians, frank sex, history, religion and really everything that today I consider utterly fascinating.  Thank you Book of the Month Club.

I began with the historical novels because they were accessible, enjoying their interweaving of fact and fiction; how they seemed so present with references to places I could actually see someday.  But then I made a project of looking at the less mainstream works like Myra Breckinridge and his “coming out” novel The City and the Pillar, his essays, interviews and screenplays and the man became an obsession for me.  I thought to myself how I would like nothing more than to be able to weave humor, sex, fact and fiction into such a delicious concoction of entertainment.  I was completely smitten and  I developed a mad crush on him when I saw his youthful image at age 21 (my what a lovely mouth.) When I discovered a link between him and Jacqueline Kennedy Onassis, my little gay heart swooned even more.

But what was it that I found so damned attractive in both the writing and the man?  He was opinionated to a fault.  He was a snob. He was a member of the 1%.  I realize now that I was intoxicated by the contradictions he embodied.  Here was a man who was part of the “upper classes” who although not willing to ever step out of that world, was fully willing to take pot shots at it and expose its seamy underbelly.  To listen to him in interviews, one is immediately struck by almost caricature-like affectation, yet what he says is often fairly gritty and down to earth.  Like one of my other heroes, Cole Porter, he fully acknowledged that he was coming from the standpoint of glaring and exclusive privilege, yet he was also willing to see the ridiculousness and irrationality of that same privilege…at least to a point.  We don’t have that anymore; where are the people who are willing to recognize that they have all the cards, but at the same time that the cards are all Jokers and not Aces?

So today, Gore Vidal, the last of my favorite 20th century authors has passed away.  My great inspirations: Langston Hughes, James Baldwin, Tennessee Williams, Truman Capote and Gore Vidal.  Just the other day, I shared with a friend how much I always dreamed of sitting down for lunch with him at his villa in Italy just to chat over politics, people, travel, sex…and just once touch that great brain first hand.  I always imagined sitting up there on a balcony at sunset, having had just a little bit too much Chianti, a faithful manservant clearing away the dishes and an aged but still saucy Gore Vidal sitting across from me.  As I inhale the glorious smell of the ocean wafting up from the cliffs, I catch a glimpse of him out of the corner of my eye and notice a smirk on his face that is somewhere between paternal academic admiration and pure flirtatious lust.  And with that one stolen glance, I am able to understand the man and all of his life’s work completely. Irreverent, improper, audacious, pampered, privileged and pompous, bombastic, bellicose and utterly brilliant.  Thank you very much, Gore Vidal.

This site uses Akismet to reduce spam. Learn how your comment data is processed.